Polygamy and polyamory are not the same but they are commonly confused and sometimes mistakenly used interchangeably. However, they are practiced very differently and a man or woman would choose one over the other for many personal and ethical reasons.

Polygamy is the practice of having multiple spouses.

Although it has been shown in a religious context on TV shows like Big Love and Sister Wives, most polygamists are not doing it for religious reasons. Rather, the reasons are deeply personal. 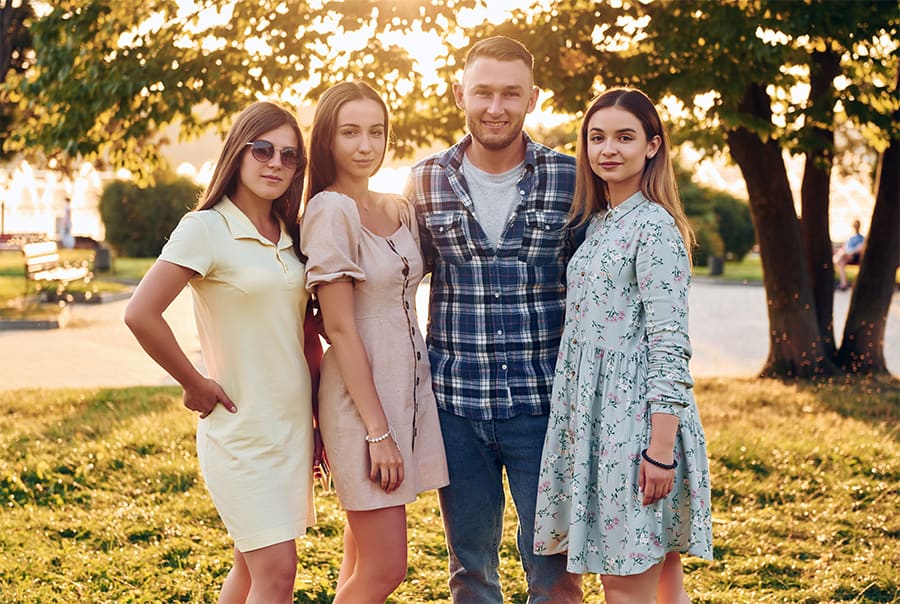 Its growing popularity is largely due to the belief that it encourages building more stable relationships and stronger families.

Many women also find it appealing that polygamous relationships lack the shallow nonsense that can so easily cloud traditional dating.

The first thing most people notice is that everyone has long-term intentions. No one is looking to hookup, lead you on, or play with your heart.

You date because it may lead to something more serious, which may lead to marriage and a lifelong deep partnership.

Polygamy is all about commitment and building a life together, with records of it going back to our earliest understanding of historical events. Although generally practiced by more conservative people, it is not attached to a specific ideology.

What Are The Advantages Of Polygamy?

Polygamy was practiced throughout history for the simple fact that it has many benefits over monogamy. With more love being felt and expressed, more parents caring for the children, and a wider support network for each spouse, plural marriages are generally happy with the biggest issue being jealousy. However, having good communication between all parties from the beginning is absolutely critical to maintaining a healthy relationship.

How To Find A Polygamous Relationship

Join a dating site for polygamy to meet other people from all over the world. It's free to join and dedicated to helping people get started in polygamy.

Its rise in popularity is mainly political and ideological. Prior to this shift, if someone just wanted multiple partners they called themselves swingers and went on about their lives. But, the polyamorous community has clear and distinct ideological drivers and is not simply a "because I want this" kind of thing.

To understand the ideology and politics at the root of polyamory, refer to https://www.reddit.com/r/polyamory/.

Polyamory is also, generally speaking, non-committal and even anti-relationship in the traditional sense. This makes it a much more volatile issue due to its political and ideological connections as well as a lack of, and disdain for, coherent family units.

Non-monogamy covers every type of non-monogamous relationship including polygyny, polyandry, polyamory, open relationships, and swinging. The term doesn't so much have a definition of what it is as much as what it is not whereas polyamory is consensual non-monogamy but without being in the context of a committed relationship.

What Are The Advantages Of Polyamory?

Polyamorists wanting to promote the lifestyle will generally argue that it fights the patriarchy (which they view monogamy as a part of) and lets individuals express their gender identity and sexuality without cheating. At the same time, you never really see them happy and the culture does not tend to stop and question why.

In the United States, poly relationships are treated the same way as any sexual relationship between adults. While only people who love each other in a monogamous relationship can get legally married, polyamorous people are free to live the lifestyle of their choice.

The difference between polygamous and polyamorous relationships is commitment. That is what really separates the two.

While polyamory is essentially rebranded swinging or open relationships with emotional support, the basis of polygamy is the exact opposite.

Where having random "relationships" with one-time or regular partners is celebrated in the polyamorous community, polygamy is an entirely closed relationship. And that is kind of the point if you want to date a polygamous couple.

It also seems to attract very different people, both philosophically and politically.

Polygamists are more likely to be traditionally minded and want a more traditional dynamic, or at least a "marriage" and commitment.

In contrast, much of the poly community abhors any kind of obligation between partners or compromising your own desires for what's best for your partner, especially if you are happy doing that.

What you will find they do have in common is supporting the right to choose to be married to more than one person at a time.

In that regard, polygamists share an interest with the polyamorous community and one that both should embrace.